The first idea of neutrino masses, mixing and oscillations was suggested by Bruno Pontecorvo in 1957 [Pon57]. He thought that there was an analogy between leptons and hadrons and that neutrinos could oscillate in an analogous way to the K0-antiK0 system. At that time only one neutrino type was known and the only possible oscillation would be between neutrinos and antineutrinos. After the discovery of the muon-neutrino, it was very natural to Pontecorvo to generalize his first idea to the case of two neutrinos [Pon67]. In this paper, Pontecorvo already anticipated that solar neutrinos could oscillate, before the first Davis’s result. The first phenomenological theory of two-neutrino mixing was soon proposed by V. Gribov and B. Pontecorvo in 1969 [Gri69].

A few years earlier, two-neutrino mixing had been proposed in 1962 by Z. Maki, M. Nakagawa and S. Sakata in a paper which remained unknown for many years [Mak62]. They already assumed that there exists a representation which defines the “true neutrinos” ν1 and ν2 through linear combinations of νe and νμ. The lepton mixing matrix of 3 neutrinos has naturally taken the name PMNS for Pontecorvo, Maki, Nakagawa and Sakata.

Quantum mechanics allows that the three flavour eigenstates (νe, νμ, ντ) are not necessarily the mass (or propagation) eigenstates but linear combinations of ν1, ν2, ν3, of respective masses m1, m2, m3. There is the relation νl = ΣmUlmνm, where Ulm is the PMNS matrix, which contains three mixing angles θ12, θ23 and θ13:

When neutrinos propagate in the vacuum, each mass eigenstate evolves with its own phase factor, which depends on its mass and on its energy. This induces a change of flavor, which has an oscillatory behavior with the distance (hence the name neutrino oscillation). At the detection, the probability P(νi  → νj) depends on the three mixing angles and on two Δm2ij (Δm221and Δm223), on the neutrino energy E and on the distance L traveled. To determine the real oscillation parameters θij and Δm2ij, physicists had to play with E and L.

In 1980, Reines and collaborators performed a new experiment at the Savannah River nuclear plant. Observing the interactions of antineutrinos on deuterium, they measured the ratio between neutral current and charged current at 11 m from the core of the reactor. The result was 2-3 sigma from the theoretical predictions and has been interpreted as a possible neutrino oscillation [Rei80]. This result has been later proved to be wrong (or overinterpreted), but triggered a lot of experiments to look for neutrino oscillations.

Soon after a French-German-US team searched for neutrino oscillation at the fission reactor of the Laue Langevin Institute (ILL) in Grenoble; they found a result consistent with no-oscillation [Vui82]. The ILL team gave birth to two teams: Goesgen in Switzerland and Bugey in France. In 1984, the two experiments found opposite results: Bugey observed a neutrino deficit interpreted as an oscillation [Cav84] but Goesgen did not confirm. The Bugey team found later the error in the analysis and retracted their premature announcement. There were also several experiments using accelerators at Los Alamos, Brookhaven, Fermilab and CERN [Wot84], all with negative results. In 1998, the Chooz experiment, installing a detector underground at ~1km from the reactor cores, improved the limit on oscillation parameters: excluding neutrino oscillation for sin2(2θ) > 0.18 or  Δm2 > 0.9 10-3 eV2 [Apo98,Apo99]. It opened the door to the new generation of detectors (Double Chooz, Daya Bay, RENO) which measured oscillation at about 1 km from the core of the reactors [Abe11b,An12,Ahn12] and made the exact determination of the Θ13 mixing angle.

In 1978, Lincoln Wolfenstein showed that the effect of coherent forward scattering must be taken into account when considering the oscillation of neutrinos traveling through matter [Wol78]. Developing this property, Stanislas Mikheyev and Alexei Smirnov showed in 1985 that an adiabatic conversion may be realized if the neutrinos cross matter with slowly varying density:  neutrinos may change of flavor in some conditions [Mik85], i.e. electron-neutrinos may transform into muon- or tau-neutrinos.  The effect has been named MSW by Albert Messiah at the Moriond Conference in January 1986.
It was soon anticipated, in particular by Bethe [Bet86], that this effect could explain the solar neutrino deficit observed by Davis. Indeed the electron neutrinos produced at the center of the Sun cross all the Sun, whose density varies smoothly by several orders of magnitude until the surface. The idea that electron-neutrinos having disappeared in the Sun could regenerate within some conditions when they reach the matter of the Earth, thus generating the day-night effect, has been then studied [Bou86,Cri86,Bal87].

The oscillation parameters – Towards the PMNS matrix

The many experiments in the 80’s and 90’s did not discover the neutrino oscillation, since the distance and/or the energy did not correspond to the real values of the oscillation parameters.

The third mixing angle has been determined since 2012 by the reactor experiments Double Chooz, Daya Bay and RENO [Abe11b,An12,Ahn12], and by the accelerator T2K experiment [Abe11a]. A complete review of the “birth of the PMNS paradigm” is found in [Gig18]. In 2018, current known values are in the table (3 sigma intervals of the PMNS matrix values) [Pdg18]: [a remplacer par les valeurs mesurees de dm2 et angles thetaij ou sin(2thetaij)]

Those values are deduced from the global fit determination of the oscillation parameters (PDG 2018, page 9): 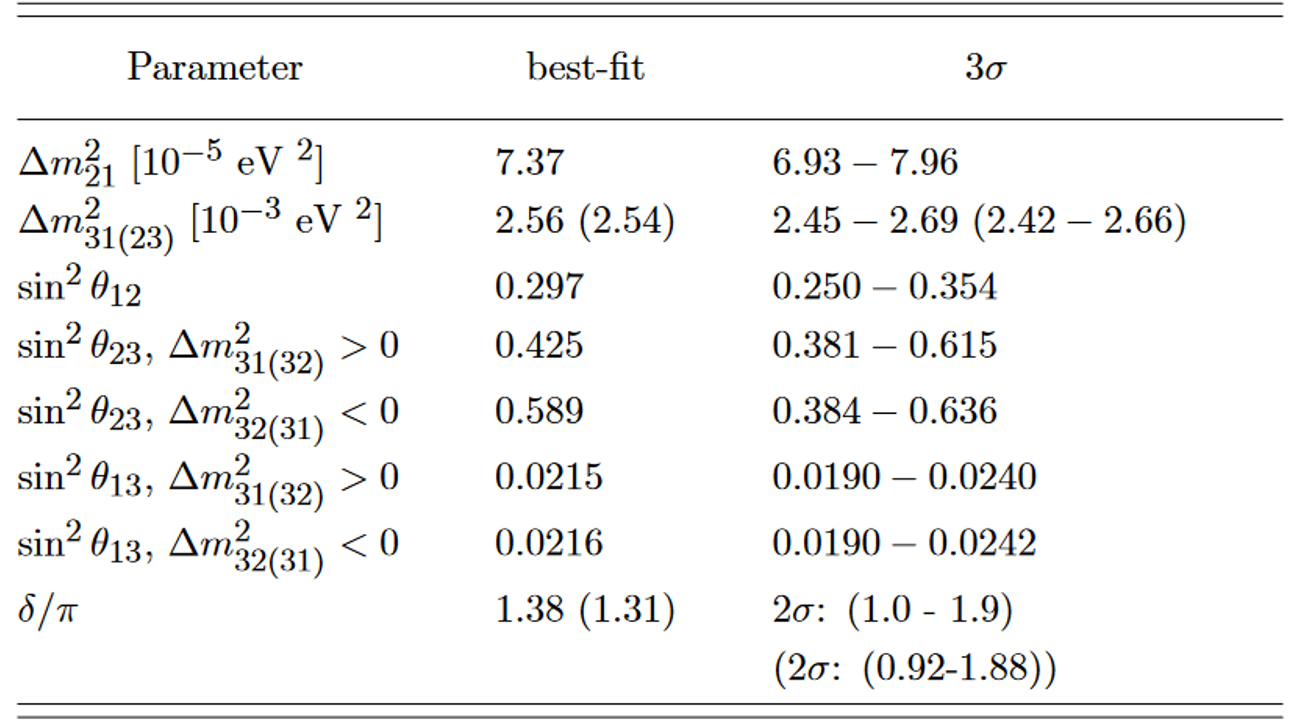 In reality, it is not exact to say that the solution of the solar neutrino problem is the neutrino oscillation. As underlined by Smirnov, it is a combined effect of oscillation and adiabatic flavor conversion of neutrinos in the matter of the Sun via the MSW effect [Smi16].

A nice account of the history of neutrino oscillation by S. Bilenky can be found in [Bil04].

The online Symmetry Magazine published in February 2010 an article on the discovery of neutrino oscillation.

During the conference on the History of the Neutrino (Sept. 5-7, 2018 in Paris) the subject of Neutrino Oscillation was reviewed by :