Matter is made of atoms, composed of a nucleus (made of protons and neutrons) surrounded by electrons. Protons and neutrons are each made of three elementary particles named “quarks”. Electrons are one type of elementary particles named “leptons”. According to the standard model of particle physics, there are 6 types of quarks and 6 types of leptons.
The leptons having an electric charge are the electron, the muon and the tau. A lepton with no electric charge is associated to each of them: the electron-neutrino (νe), the muon-neutrino (νμ) and the tau-neutrino (ντ). Within the standard model, the neutrino has a zero mass, a zero charge and a spin ½. 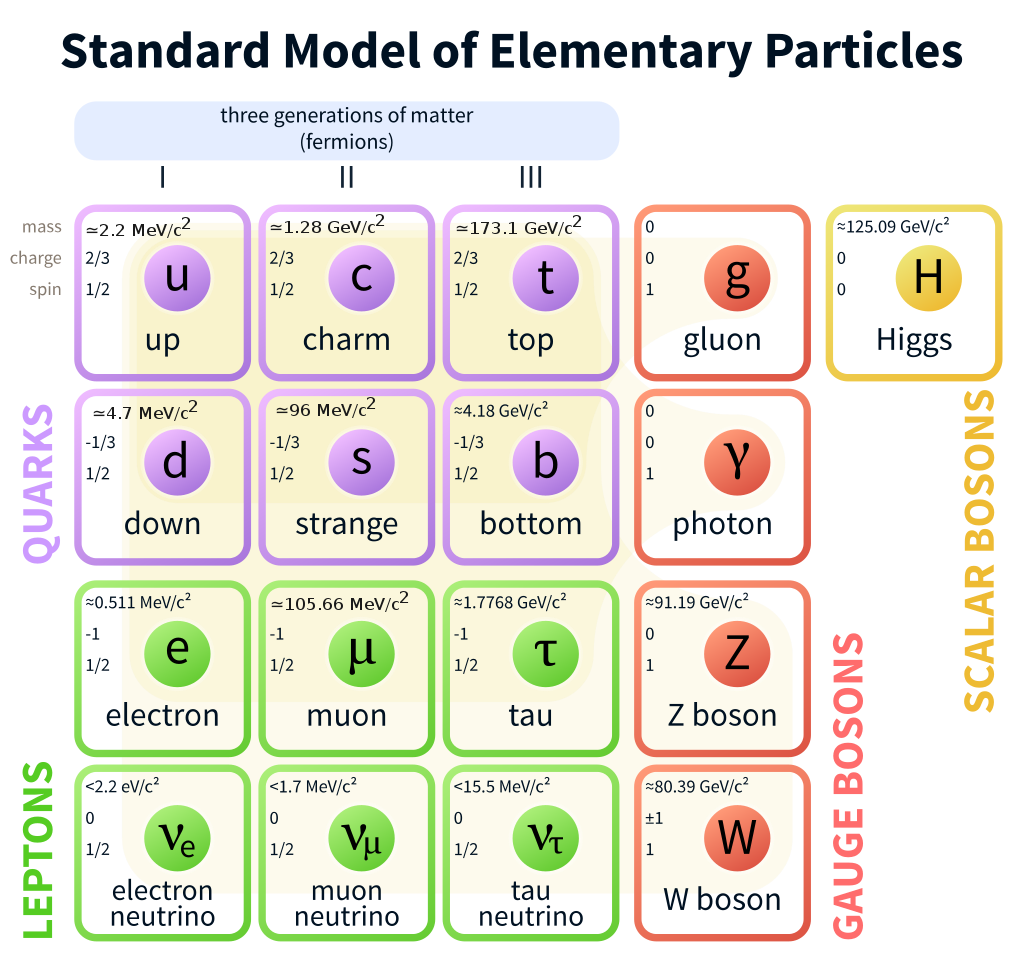 In 1956, T.D. Lee and C.N. Yang (trying to solve the so-called θ-τ puzzle) proposed that parity could not be conserved in the weak interaction [Lee56] and suggested different experiments. This hypothesis has been immediately tested by C.S. Wu and her collaborators (and soon after by others) : by observing an asymmetry of the electrons coming from beta decay of Cobalt-60 nuclei, they proved the non-conservation of parity in weak interaction [Wu57]. To incorporate parity violation in the theory of weak interaction, Lee and Yang (and others)  proposed a two-component theory of the neutrino [Lee57] in which the neutrino is left-handed (spin antiparallel to its momentum) and the antineutrino is right-handed (spin parallel to its momentum). This property was called handedness or helicity. Soon after, M. Goldhaber and his collaborators measured the helicity of the neutrino in a beautiful experiment [Gol58]. In addition to those nice results, current (2018) experiments like T2K tend to point also a CP violation in the neutrino sector.

In 1989, the LEP, the new CERN electron-positron collider, designed as a Z factory, started to produce a lot of Z bosons. The study of the width of the mass spectrum of the Z showed that only three light neutrino families exist [Aar89,Akr89,Dec89,Ade90]. This was a major result! Indeed the Z mediates the weak interaction between all fermions and its width increases with the number of families Nν. The combined result of the four LEP experiments (Nν= 3.10 ± 0.10) has been improved and is now Nν= 2.92 ± 0.05, corresponding unambiguously to three light active species [Pdg18] (hypothetic sterile neutrinos would not contribute). The number of neutrinos is also constrained by astrophysical data, by the detection of the neutrino burst from SN1987A and by the cosmological constraint based on the observed He/H abundance ratio in the primordial nucleosynthesis [Den90].

In 1937, Ettore Majorana published a “symmetric theory of the electron and the positron”, in which he hypothesized that particles could be their own antiparticles [Maj37]. This theory was extended immediately to the neutrino by Giulio Racah [Rac37]. Today we know that almost all particles (quarks and leptons) are distinct from their antiparticle: they are said to behave as Dirac particles. “Almost” because we do not know yet if the neutrino is its own antiparticle; in this case it would be a Majorana particle.

The only known method to prove this property is the study of the double beta decay without emission of neutrinos (ββ0ν). A huge experimental effort is in progress which began several decades ago.

In 1935, Maria Goeppert-Mayer calculated the (very small) probability of simultaneous emission of two electrons and two antineutrinos [Goe35], the double beta decay (2β-decay). This process, rarer than the single beta decay, is characterized by a very large lifetime. In 1939, W. Furry already noticed that there is a marked difference between the results of Majorana’s symmetrical theory of the neutrino [Fur39] and the original Fermi-Dirac theory; in the Majorana theory, only two particles are emitted, two electrons. We still face today the question of the identity of the neutrino (Dirac vs. Majorana) and the search for neutrinoless double-beta decay seems to be the only way to solve this important question.

The first experiment searching for 2β-decay was done by Fireman in 1948 using Geiger counters. In this experiment a half-life limit T1/2>3·1015 years was established for 124Sn [Fir49]. During the period 1948 to 1965 ∼20 experiments were carried out with a sensitivity to the half-life on the level ∼1016−1019 years (see [Hax84]). The 2β-decay was thought to have been ”discovered” a few times, but each time it was not confirmed by new (more sensitive) measurements (in 2011, V. Tretyak published an interesting story of “false starts in history of searches for 2β-decay” [Tre11]); this is true in particular for the geochemical experiment by Inghram and Reynolds in 1950 who studied 2β-decay for the 130Te isotope [Ing50]. It is only in 1968 that the first measurement by Till Kirsten et al. gave a half-life of 1021 years for the 130Te [Kir68].

The direct (and elegant) proof of the double beta decay with neutrinos came in 1987 when Moe and his collaborators observed in a time projection chamber the two electrons coming from the decay of 82Se, energy conservation requiring that two neutrinos were simultaneously emitted [Ell87].

The double beta decay with neutrinos has been observed in about 12 nuclei but the experimental effort since many decades is focused on the search for double-beta decay without neutrinos, which would give the proof that neutrinos are Majorana particles (i.e. their own antiparticle).

As early as 1933, Francis Perrin showed that the neutrino mass had to be very much lower than the electron mass [Per33]. Once incorporated in the minimal standard model of particle physics, the neutrino had a mass assigned to zero, since there is no right-handed neutrino. This uncomfortable situation did not prevent physicists to build experiments to measure the neutrino mass. Three paths have been used:

Tritium 3H is radioactive (T1/2=12.3yr) and decays into 3He +e⁻+ νe. It has been considered very early [Kon47] as a good candidate for measuring the neutrino mass, using the kinematics of the decay: by measuring accurately the energy spectrum of the final electron, the region close to the endpoint is directly associated to the mass of the νe (see 2.3 in [Win91]). The first measurements were made in 1949 by Curran et al. [Cur49] and Hanna and Pontecorvo |Han49],using a proportional counter and giving a limit of 10 keV (already 50 times less than the mass of the electron). Using electrostatic and magnetic spectrometers, the limit was improved in 1952, to 250 eV, 2000 times less than the electron mass, convincing most physicists that the mass of the neutrino was identical to zero [Ham53].

Some improvements were made at the beginning of the seventies, in particular by Bergkvist (limit of 60 eV in 1972) [Ber72], until the announcement of a positive result in the spring of 1980. Valentine Lubimov and his colleagues, in Moscow, using a dedicated spectrometer, claimed to have measured a mass of about 30 eV (between 14 and 46 eV) [Lub80]. In 1986, this was contradicted by a team led by Walter Kundig in Zurich and using a similar spectrometer; they found an upper limit of 27 eV [Fri86], later improved to 15 eV. The question “measurement or limit” was open until 1990-1991, when new groups in Los Alamos and Tokyo found upper limits of 9.4 eV and 13 eV respectively (a lively account can be found in p.53-61 of [Sut92]). It was then clear that the Moscow announcement was premature and that the mass of the electron-neutrino was not yet measured and was really very small. In 1999, two new experiments improved the limit to 2.8 eV [Wei99] and 2.5 eV [Lob99]. Today, the first results of the KATRIN experiment [Osi01, Ake19] put a the limit at 1.1 eV.

Most of the attempts to measure the neutrino mass focused on the electron-neutrino νe. It is also mandatory to measure the mass of the muon- and tau-neutrinos.  Similarly, only upper limits have been obtained, also based on kinematical techniques. The first crude estimate of the muon-neutrino mass, an upper value of ~1 MeV, was given by Barkas in 1956 (before the muon-neutrino discovery!), as a back product of the pion and muon mass measurements [Bar56]. In 1982, the limit obtained studying pion decays in flight, 0.5 MeV, was not significantly improved [And82]. The limit obtained in 1994 by Assamagan et al. (0.17 MeV) has not been improved since more than 20 years [Ass94]. For the tau-neutrino mass, the best limit (18 MeV) has been obtained in 1998 in the ALEPH experiment and is not very constraining [Bar98].

Mass determination from Astrophysics and Cosmology

Astrophysical neutrinos coming from a supernova explosion can also be used to give a limit on the neutrino mass. As soon as 1968, it was anticipated by George Zatsepin that one could obtain an upper limit on the neutrino mass by measuring the difference in the arrival time between low-energy and high energy supernova neutrinos [Zat68]. He also stated that a value of 2 eV (two orders of magnitude lower than the known limit, could be obtained. After the observation of SN 1987A, on February 23, 1987, several authors used the neutrino interactions measured by Kamiokande and IMB to infer a limit on the neutrino mass. For example, Spergel and Bahcall found a limit of 16 eV [Spe88]. The best limit (5.7 eV) has been obtained by Loredo et al. [Lor02] from a detailed and complete analysis.

Assuming big-bang cosmology is correct (today a reasonable assumption), there are also cosmological constraints on the sum of the neutrino masses Σm(νi). The first limit has been obtained in 1966 by Gershtein and Zel’dovich who found 400 eV [Ger66], by considering the gravitational effect of the neutrinos on the dynamics of the expanding universe.  In 1972, Cowsik and McClellan made a more detailed calculation (so that the gravitational effect of the neutrino thermal background on the expansion of the Universe be not too severe) and found 66 eV [Cow72] (see also [Sza74]). The interest of these studies has been renewed after the COBE results and the many following developments in cosmology from the 90’s. A first significant limit (2.7 eV) was made by Fukugita et al. in 2000, based on cosmic structure formation in a low-matter density Universe [Fuk00]. Since then, using a lot of new data from the cosmic microwave background, especially from the Planck results, the clustering of galaxies and the Lyman-a forest, the baryon acoustic oscillations and new determinations of the Hubble parameter, the more recent analyses give a limit of 0.15 eV [Pdg18], much smaller than the value obtained from direct measurements.

Coming back to theory, one can say that neutrino masses offer proof of physics beyond the standard model. The Higgs mechanism which provides mass to quarks and charged leptons is not efficient for the neutrinos. The most popular approach (still to be proved experimentally) to give a very tiny mass to the neutrino is the see-saw mechanism which predicts that the product of the neutrino mass by a very large mass (typically the scale of grand unified theories – this mass could be that of a sterile and very heavy right-handed neutrino) is of the order of the square of the typical quark or charged lepton mass [Min77,Gel79,Yan79]. More details can be found in this page.

During the conference on the History of the Neutrino (Sept. 5-7, 2018 in Paris) the Neutrino Properties were reviewed by :