Since the pioneering work of Bethe and others, it was anticipated that the energy of the Sun was produced in its core by the fusion of hydrogen into helium [Wei37,Bet38,Bet39]. This process is accompanied by the emission of neutrinos, which are the only witnesses of the phenomenon. In 1964, John Bahcall developed his first solar model and calculated that the chlorine-argon reaction would be the most promising method to observe solar neutrinos [Bah64]. Simultaneously, Ray Davis revived his chlorine-argon detector [Dav55]. He proposed to install 390 000 liters of perchlorethylene (C2Cl4) in the Homestake Gold mine (South Dakota), deep underground to avoid cosmic rays interaction. Such a detector would observe few 37Cl to 37Ar conversion per day [Dav64]. His first results, in 1968, were a big surprise: Davis observed less than 0.2 37Ar produced per day, much less than the prediction [Dav68]. This is the start of the solar neutrino problem, which will be solved only in 2001. At the end of the 70’s, the solar neutrino deficit was better quantified: (0.39± 0.06) 37Ar were produced per day translated into 2.1±0.3 solar neutrino units and compared to 7.8±1.5 expected from solar models [Cle81]. The final result has been published in 1998 [Cle98].

After the first chlorine results, many ideas to observe solar neutrinos have been proposed, radiochemical (using gallium, lithium or bromine targets), geochemical (using molybdenum) or direct counting experiments (indium target or elastic interaction on electrons or deuterium). Few of them survived, in spite of beautiful R&D developments.

The first one, a direct counting experiment, was Kamiokande, a large Cerenkov detector (3000 tons of water seen by 1000 PMT’s) designed to observe proton decay. After an improvement of the detector, the solar neutrino detection started in 1986, with a threshold of 7 MeV (i.e. a sensitivity to solar 8B-neutrinos only). Kamiokande observed the scattered electrons from the elastic reaction νe + e⁻  → e⁻ + νe. In 1989, Kamiokande announced to have observed only about 45% of the expected solar neutrinos [Hir89], confirming the solar neutrino problem.

The gallium target was soon considered as very attractive, since it was sensitive to the complete solar neutrino spectrum, including neutrinos from the primary pp fusion reaction. The idea to use the reaction νe +71Ga → e⁻ + 71Ge (followed by the observed 71Ge decay) had been proposed in 1966 [Kuz66], 12 years before the first concrete proposal [Bah78b]. It took again 12 years to see two gallium experiments starting, GALLEX in the Gran Sasso Underground Laboratory (Italy) and SAGE in the Baksan Laboratory (Russia). The first observation of solar pp-neutrinos was announced by GALLEX in June 1992 [Ans92], later confirmed by SAGE [Abd94]. The gallium experiments observed only 60% of the neutrinos predicted by the solar models. The different deficit observed in the different experiments made the solar neutrino problem more and more puzzling.

In the middle of the 90’s, the solar neutrino problem was experimentally established: a deficit of solar νe was observed in the three experiments (chlorine, Kamiokande and gallium). It was reinforced by the measurement provided by the SuperKamiokande experiment in 1998 [Fuk98a], more precise than the Kamiokande one. Three ways to solve the problem were discussed:

This exciting third solution became more and more popular, but it had to be proved! At the same period, starting from the observation that the deficit is not uniform, people developed a simple arithmetic mixing the experimental results with the solar model predictions which showed that solar νe coming from the 7Be chain seemed to have completely disappeared. If no serious solar model could accommodate this surprising conclusion, the oscillation mechanism completed by the MSW effect had no difficulty to explain the phenomenon. But the experimental proof was still missing. 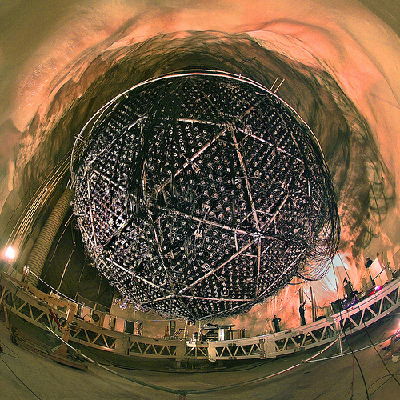 In 1985, Herbert Chen pointed out that the reaction on deuterium νx + d → νx+ p + n (where νx represents any neutrino flavor) would give a direct measurement of the solar neutrino flux, independently of any possible oscillation [Che85]. This was the starting point of the Sudbury Neutrino Observatory (SNO): the use of a large heavy-water Cerenkov detector deep underground in the Sudbury mine (Canada) [Aar87]. It took more than 10 years to build the detector (1000 tons of heavy-water D2O observed by 9500 photomultipliers) which started to take data in November 1999. With a threshold of 6.75 MeV, the detector was sensitive only to 8B solar neutrinos (like SuperKamiokande). The first result, announced in June 2001, was really great: the observed solar νe flux was similar to that observed by SuperKamiokande in normal water (i.e. showing a deficit), but the total flux was similar to the one predicted by solar models (about 5 106 cm-2s-1) [Ahm01]. This was confirmed in April 2002 with a direct measurement of the neutron in the reaction νx + d → νx+ p + n [Ahm02]. The two important results were that solar neutrinos oscillate and that the solar models are correct.

The demonstration that neutrinos oscillate had already been made by the measurement of atmospheric neutrinos in the Superkamiokande experiment in 1998 [Fuk98a], but it concerned oscillation of νμ into ντ. For SNO, the oscillation is between νe and νμ or ντ. The phenomenology of neutrino mixing can be developed and involves three mixing angles θij and two Δm2ij.

In addition to this achievement, the story of solar neutrinos has had further success. Since 2007, the Borexino experiment at the Gran Sasso laboratory has been able to measure with a reasonable precision all the components of the pp cycle (starting with the pp-neutrinos from the initial pp fusion reaction [Bel14], continuing with the pep, 7Be and 8B neutrinos). In 2020 Borexino succeeded in observing for the first time the CNO neutrinos [Ago20] at a value close to the solar model predictions, completing masterfully the spectroscopy of solar neutrinos. The so-called CNO cycle is responsible of about 2% of the energy produced in the Sun, but is dominant in more massive stars.

Brief bibliography on the solar neutrino problem and on solar models

A detailed account of the first steps of the solar neutrino detection and the raise of the “solar neutrino problem” is given by two pioneers in [1]. We also mention the interesting work by Pinch who, motivated by the longstanding solar neutrino problem, studied solar neutrinos from a sociological point of view [2]
[1] John N. Bahcall and Raymond Davis Jr., An account of the development of the solar neutrino problem in “Essays in Nuclear Astrophysics”, Cambridge University Press, 1982, edited by C.A. Barnes, D.D. Clayton, D.N. Schramm;
[2] Trevor Pinch. Confronting Nature, The sociology of Solar-Neutrino Detection, Kluwer/Reidel, 1986
The start of the development of solar models (in the frame of solar neutrino production) is the pioneering paper by John Bahcall [3]. It has been followed by the paper [4] which appeared in 1968 simultaneously with the first result of the chlorine experiment.
[3] J.N. Bahcall. Solar neutrinos. I. Theoretical, Phys. Rev. Lett. 12 (1964) 300
[4] J.N. Bahcall, N.A. Bahcall and G. Shaviv, Present status of the theoretical predictions for the 37Cl solar neutrino experiment, Phys. Rev. Lett. 20 (1968) 1209
Later Bahcall developed the so-called ”standard solar model” (SSM) with different collaborators and published regular updates. The main steps are found in references [5], [6] (solar models takes also into account the helioseismological observations), [7,8] (introduction of the helium and heavy element diffusion in the modeling). Among the other solar models developed over the years, we quote the work by S. Turck-Chièze and collaborators [9]. To explain the solar neutrino problem, many so-called non standard models have been studied; as an example, we quote the reference [10].
[5] J.N. Bahcall, W.F. Huebner, S.H. Lubow, P.D. Parker and R.K. Ulrich, Standard Solar Models and the Uncertainties in Predicted Capture Rates of Solar Neutrinos, Rev. Mod. Phys. 54 (1982) 767
[6] J.N. Bahcall and R.K. Ulrich, Solar Models, Neutrino Experiments and Helioseismology, Rev. Mod. Phys. 60 (1988) 297
[7] John N. Bahcall, M.H. Pinsonneault, Standard solar models, with and without helium diffusion, and the solar neutrino problem, Rev. Mod. Phys. 64 (1992) 885
[8] John N. Bahcall, M. H. Pinsonneault, and G. J. Wasserburg, Solar models with helium and heavy-element diffusion, Rev. Mod. Phys. 67 (1995) 781
[9] S. Turck-Chièze et al., The solar interior, Physics Reports 230 (1993) 57
[10] V. Castellani et al., Solar neutrinos : beyond standard solar models, Physics Reports 281 (1997) 309
After the death of John in 2005, the development of the standard solar model has been pursued by C. Pena-Garay, A. Serenelli and others. The most recent issue is [11].
[11] Núria Vinyoles et al., A new generation of standard solar models, arXiv:1611.09867
A complete account of the first 30 years of the solar neutrinos is given in [12].
[12] John Bahcall, Raymond Davis, Peter Parker, Alexei Smirnov, Roger Ulrich ed., Solar neutrinos: the first thirty years, Addison-Wesley (1994).
In 1989, a first interdisciplinary conference on the Sun was organized in Versailles, covering solar modelling, as well as neutrinos, helioseismology (the other experimental source of information on the interior of the Sun), solar dynamo or transport processes [13]. For science historians, it can also be used as a benchmark: what was known in these years.
[13] G. Berthomieu and M. Cribier, editors, “Inside the Sun”, Proc. of the 121stIAU Colloquium, Versailles, France, May 22-26, 1989, Kluwer Academic Publishers (1990).

The online Symmetry Magazine published in May 2005 an article on solar neutrinos. and in August 2014 an article on the measurement of Sun’s real-time energy by Borexino.

During the conference on the History of the Neutrino (Sept. 5-7, 2018 in Paris) the history of Solar Neutrinos was reviewed in two talks :